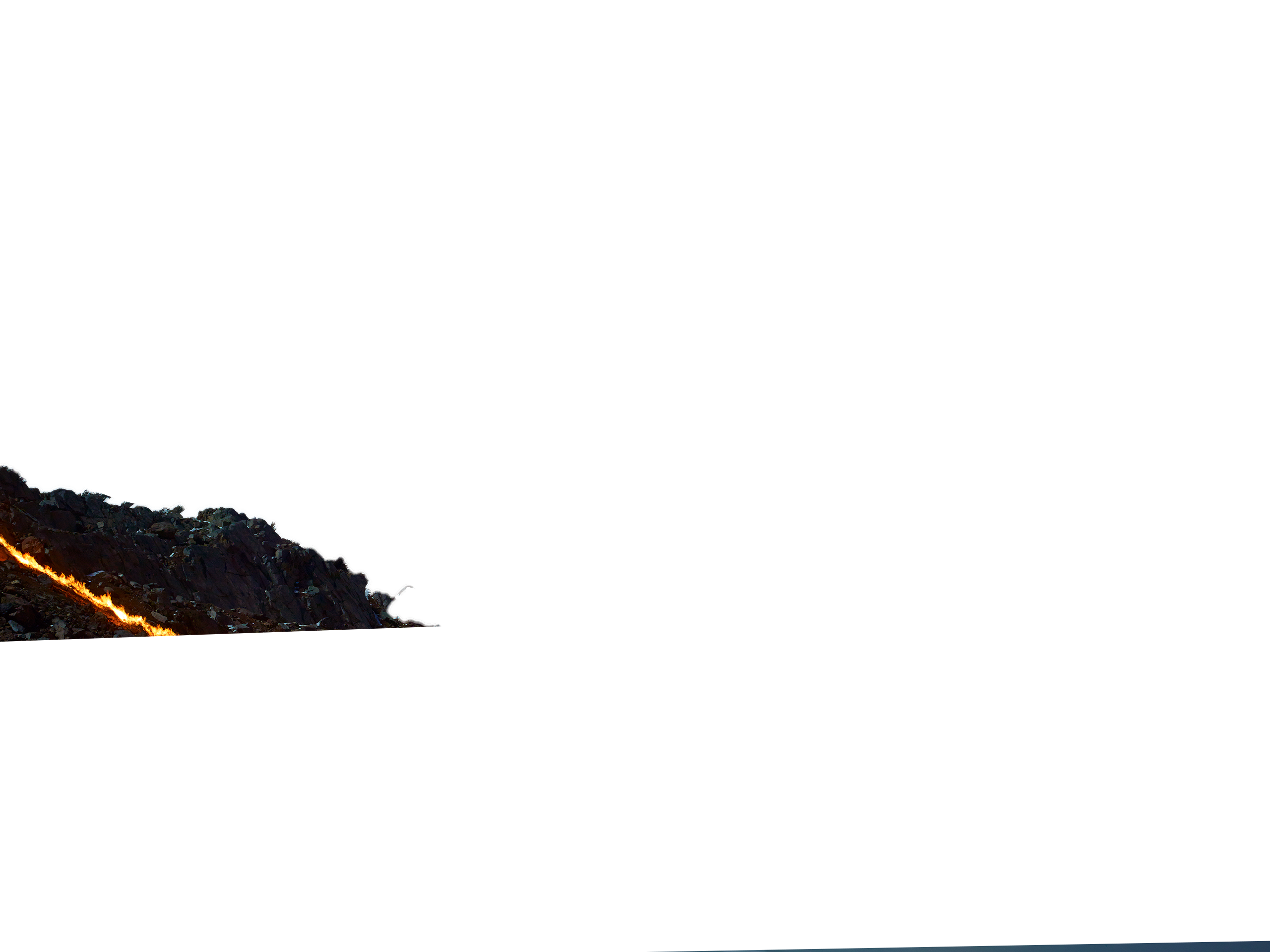 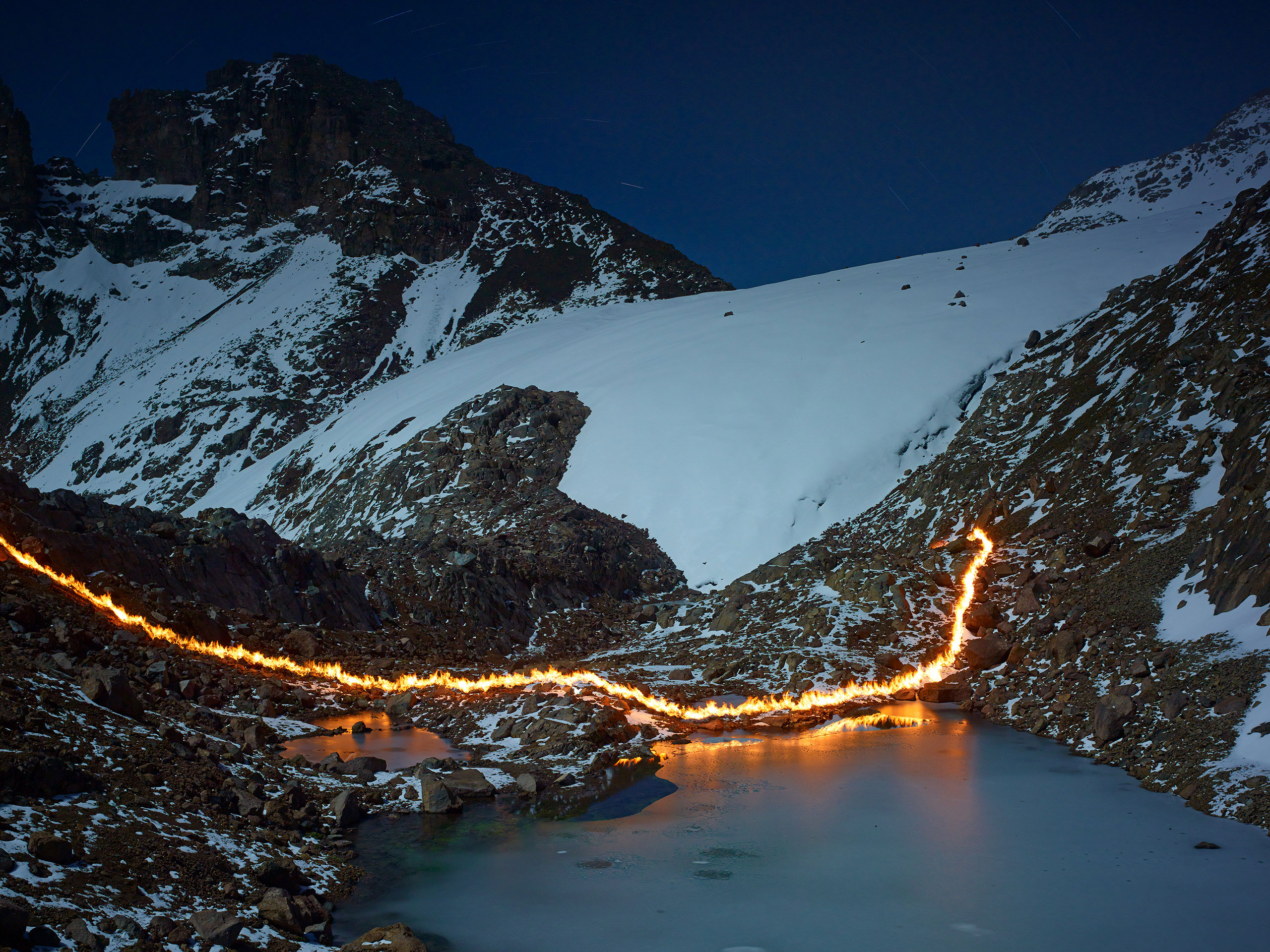 WHEN I AM LAID IN EARTH

WHEN I AM LAID IN EARTH

Mapping with a Pyrograph, the melting of the Lewis Glacier on Mt Kenya

These fire lines I have drawn represent where the front of the Lewis Glacier was at various times in the recent past; the years are given in the captions. In the distance, a harvest moon lights the poor, doomed glacier remnant; the gap between the fire and the ice 'snout' represents the relentless melting.

Project Pressure were the first people to inspire me to turn away from my usual fascination with warfare and to focus instead on the environment. They pointed me towards old maps, modern GPS data and mapping surveys from peer-reviewed journals. Equipping me with the correct maps was important to the documentary truthfulness of this project since I always saw it as mapping-in-reverse, a kind of unspooling of cartography. The project starts with the two-dimensional factuality of maps and then goes out and finds a kind of historical truth-on-the-ground. Photographing time's thickness, trying to expose it's 'layeredness,' is a theme which has run through all of my work these last dozen years. It was clever of Project Pressure to see that what I find interesting about the landscapes of warfare could equally be applied to glacier retreat.

It seems entirely appropriate to make these pictures here. Mount Kenya is the eroded stump of a long-dead, 6,000m mega-volcano. Photographically, I hope to re-awaken its angry, magma heart. The mountain has an especially fierce demeanour, the peaks are childishly sheer and ragged, and since I first saw them I've been thinking of Gormenghast and Tolkien. The 'Fire vs. Ice' metaphor I employ is especially delicious for me.  My fire is made from petroleum. My pictures contain no evidence that this glacier's retreat is due to man-made warming (glaciers can retreat when they don't get sufficient snow, or if the cloud cover thins, for example,) but it is nonetheless my belief that humans burning hydrocarbons are substantially to blame.

But there are romantic reasons to be here too. To be next to the ice is to feel privileged: like you are beside a colossal, sleeping giant. I imagine being close to a darted bull-elephant feels the same and I'm reminded of 17th century Dutch paintings of awestruck, bewildered Burghers contemplating a stranded whalefish. Close-up one senses the glacier's bulk, its coiled, dormant energy or its colossal longevity. And, of course, its cold, resigned indifference. One is hit by an overwhelming feeling of one's own smallness and transience. Englishmen have been feeling this way about mountains for 300 years, since Romantic, Grand Tour travellers first astonished Swiss inn-keepers with the request for help in climbing to the heights. Nobody had done that before; for the fun of it, because it made you feel whole, because it feeds the soul. But this is the opposite – to think that in ten or twelve years this elegant, magnificent glacier will exist only in photographs is unbearable. The feeling I have for the losing of the Lewis can only be called grief.

So, see it now before it's gone! Get in quick before Mount Kenya is just an unadorned rocky stump, robbed of it's crown! Unless of course you feel that flying around the world injecting tonnes of hot CO2 into the troposphere in order to witness the melting of a glacier, is just a little too ironic.