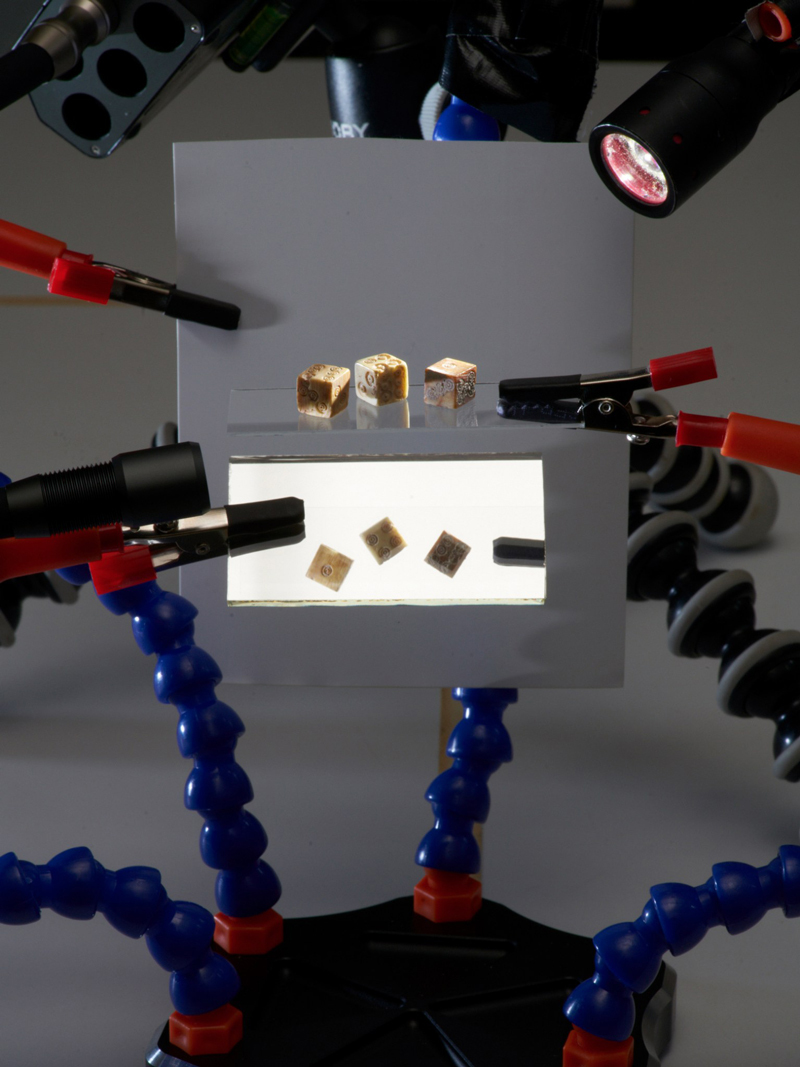 I’m in Jerusalem on an assignment for National Geographic Magazine. I don’t review many pieces of kit, but this little Adaptalux unit saved my bacon. I think of myself as a landscape photographer really and was concerned when the magazine asked me to also photograph some artefacts. And then I saw how teeny tiny they were and really started panicking!

In recent excavations at the base of the Western Wall in Jerusalem, below Robinson’s Arch, they’ve uncovered a small, late-Roman theatre-like structure. It looks uncompleted and probably never served as the venue for music and poetry that was intended. But there are signs everywhere that the Roman Tenth Legion (Fretensis) was camped somewhere nearby and the half-built theatre provided a good place for soldiers to sneak off and play dice games.

Of the 30 or so tiny bone dice found in the metres of infill, one of them is a cheating piece! It has the number four on two opposite faces. A great find and a lovely window into the ancient world with some sneak dropping this out of his sleeve and fleecing his fellow legionnaires of their last sestertius.

But what a swine to photograph! How do you show both sides of a object so tiny? How can you avoid drowning the whole thing in rubbish bounce flash? The standard of object photography at National Geographic is so high: Robert Clark, Mark Thiessen and Paolo Verzone are especially good. I needed a quick way to shoot work good enough to not embarrass myself in such company.

I bought a cheap multi-arm unit online (I think it is for soldering) and I knew I could locally source a small piece of mirror. But I was lost for lighting until the good people at Adaptalux here in the UK lent me one of their Studio units in return for a review. It’s a USB-chargeable pod with magnetic, snap-on arms that are articulated and end with a small, focusable LED. The arms can be bent to the right place, snuck through this tangle of supports and focussed-in tightly.

When everything was in place for this picture I didn’t want to touch anything because it was all so delicately balanced. They’ve thought of that though because the Studio unit pairs by Bluetooth to a mobile phone and the simple, reliable app allows me to dial the power to each of the various lights remotely. The precision was amazing. For anyone that cares it was shot with a Sony A7III and a 90mm G-Series macro lens at 1 sec. f22, 250 ISO. (There’s a little flash in there too from the side.) All pretty normal stuff. It’s the Adaptalux that makes it special.

The final images from the shoot will be published in the December 2019 issue of National Geographic Magazine.